Warning: "continue" targeting switch is equivalent to "break". Did you mean to use "continue 2"? in /nfs/c09/h05/mnt/190573/domains/diaryofafirsttimemom.com/html/wp-content/plugins/jetpack/_inc/lib/class.media-summary.php on line 87
 Beyoncé's Lemonade 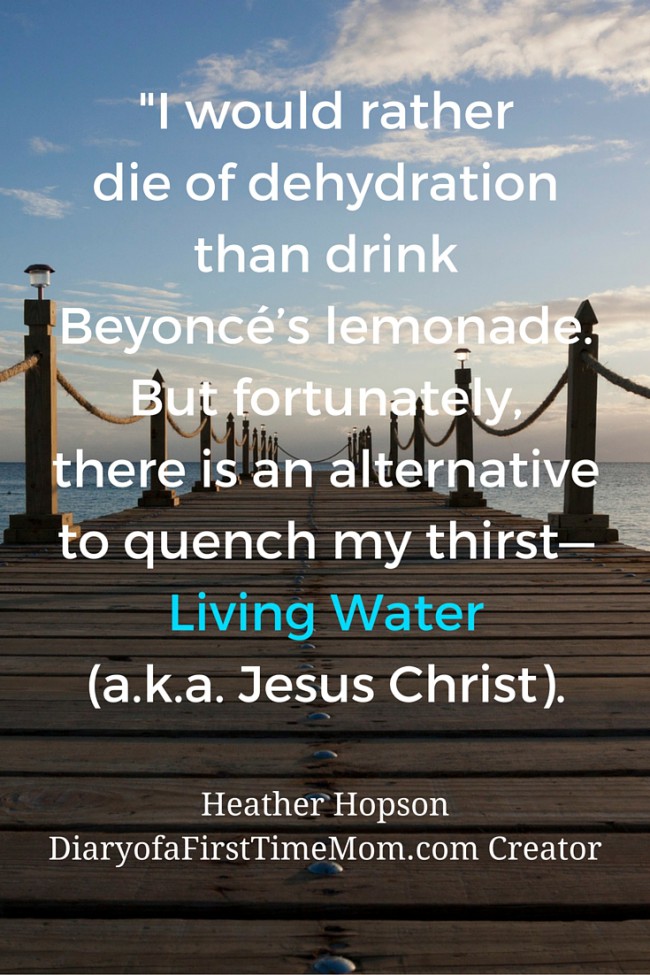 After Beyoncé broke the internet with her HBO special, my sister called me amazed—not amazed by the ingenious artistic direction, but amazed by the masses immortalizing the sultry celebrity. While poetic, Lemonade left me with a sour taste in my mouth. I wasn’t empowered. I was sickened—perhaps poisoned. I peeled back the lemon’s layers of poetry and beauty and revealed seeds of deception—the visual album’s black-man bashing and blasphemous ballads.

But then, the up-and-down motion moved to a side-to-side shaking, in disagreement with phrases like, In the tradition of men in my blood, you come home at 3 a.m. and lie to me… Love is elusive, no one I know has it… My father’s arms around my mother’s neck.

As a black woman on a journey to find the respect, protection and care Malcolm mentions, I can’t reach that elevation if I step on a black man’s head along the way. I can’t grossly categorize our men as cheaters, beaters and liars, especially since a black man who never fit those descriptions reared me. He laid a foundation of feminism. He taught me to be independent and assertive yet nurturing and apologetic—even when right, which made me strong.

While many messages in the video resonate with women of color, achieving equality at the expense of our men isn’t equality at all. Instead, it achieves the opposite. It oppresses and separates.

Lemonade expressed feminism by giving our middle fingers to our men and giving our bodies to other men in revenge.

Beyoncé did just that singing, Who the BEEP do you think I am?/You ain’t married to no average bitch boy/You can watch my fat ass twist boy/As I bounce to the next dick boy/Middle fingers up, put them hands high/Wave it in his face, tell him, boy, bye.

Don’t get me wrong: I’ve said goodbye to cheaters. In my second trimester of pregnancy, my long-term boyfriend cut our relationship short before he cut our baby’s cord. Heartbroken, I could have been like Beyoncé and took a baseball bat to his car or the other woman’s head. To be honest, I didn’t have the energy—I was tired of being sick and just tired. Soon after, my burden became my blessing. The idea of raising a baby under two separate roofs wasn’t impossible or unforgivable. I created a new ideal life. I was no longer bitter, but better. Not better as in better than a woman who would retaliate or reconcile, but this type of better was wrapped in love, kindness and forgiveness. This type of better brought about healing and rejoicing. When I was weak, I was made strong. Whether a woman stays or flees, she is tested and can persevere without persecuting a man or the other woman.

Sacrilege, even if poetic, is still sacrilegious

I couldn’t swallow the irreverent behavior toward something so sacred—my God.

As a Christian in Thailand, I didn’t picture Jesus as Buddha, but I still respected the religion. I still slipped off my shoes, slipped on a long skirt and wrapped myself in a scarf to cover my bare arms as I entered the sacred temples.

So I wondered why Beyoncé didn’t do the same. I wondered why she didn’t respect my beliefs. I levitated/drank the blood/saw the devil/plugged my menses with the pages from the holy book. Many Satanic rituals involve human sacrifice and drinking blood. This is not to be confused with the blood of Jesus, often referred to when drinking sacramental wine during Holy Communion. Is the flowery metaphor using the Bible/Quran/Torah as a tampon? This water scene overflows with religious contractions.

Although the musical meal was sprinkled with salt (Jesus), the singer doesn’t bless this food—holy ingredients disappear when black magic’s mixed in.

Beyoncé prays to God yet throws the Bible, which made me wonder what “God” was worshipped. Money? Sex? Satan? Some say Beyoncé personified Oshun, the goddess of love and sweet waters (Lemonade perhaps?) I posed the question to a Facebook friend—what is this all about? My friend replied: Beyoncé’s not selling her voice. She’s selling her soul.

Another quickly stood up for the singer and said, Art is meant to upset, disrupt, anger and even cause disenchantment as well as empower, enlighten and celebrate. That’s the beauty of it.

I wondered if our world would be even more beautiful if we defend God with the same passion we defend Beyoncé.

OK, ladies now let’s get in formation. Drop to your knees and pray for salvation!

So, this is why I would rather die of dehydration than drink Beyoncé’s Lemonade. But fortunately, there is an alternative to quench my thirst—Living Water (a.k.a. Jesus Christ).