Breastfeeding my daughter was the best bonding experience imaginable. I felt so connected to her as I looked into her eyes while nourishing her. Then suddenly at three weeks old, she became terribly ill. And breastfeeding a sick baby became terribly challenging. She had a high fever and felt very lethargic. She erupted like a volcano and threw up everywhere. My daughter was born with a heart condition, and I knew she had to go to the hospital to make sure she wasn’t having an SVT–Supraventricular tachycardia–episode. SVT is rapid heart rhythm that can be very dangerous to babies It causes difficulties in getting sufficient oxygen. During triage, they immediately admitted her into the hospital and ordered an EKG.

After a week of being in the hospital and numerous tests being done on my daughter, the doctor came to the conclusion that my breast milk was too thin and was causing acid reflux.

They recommended putting her on formula and adding oatmeal to her bottles. We tried that for a few days, and she kept the formula down and gained weight. So from that point on, I switched to formula and haven’t breastfed her since.

That was a harsh blow to my ego as a mother. I constantly questioned what was wrong with me?

During my pregnancy, I changed my diet to the recommended diet for breastfeeding mothers. If it wasn’t my diet, then there had to be something wrong with me, right? Well, if I knew then what I know now, I would’ve insisted on pumping breast milk. I realize now, that not all doctors advocate for breastfeeding let alone breastfeeding a sick baby! 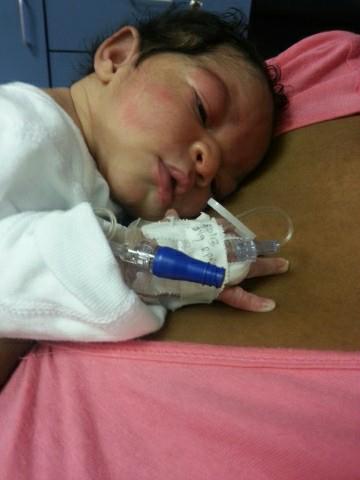 My daughter is now three weeks away from celebrating her first birthday and is a little underweight. She weighs 16 pounds and can still fit 3-6 month clothing. Although she is healthy, I can’t help but to wonder if her weight would be heavier I continued to breastfeed her. Fortunately, she didn’t have any issues with her heart or need to be hospitalized.

I sometimes feel like I did a disservice to her by switching to formula, but as the saying goes, you can’t cry over spilled milk, so I try not to dwell on it much.

Now that I am pregnant again, I definitely plan on nursing for a second time. The lesson that I learned from my experience was not to let anyone deter me from my plans of providing the best milk for my child and to be my own advocate.