Warning: "continue" targeting switch is equivalent to "break". Did you mean to use "continue 2"? in /nfs/c09/h05/mnt/190573/domains/diaryofafirsttimemom.com/html/wp-content/plugins/jetpack/_inc/lib/class.media-summary.php on line 87
 Mom of the Week: Single Mom Digs Out of Debt & Stretches Dollars to Africa - Diary of A First Time Mom 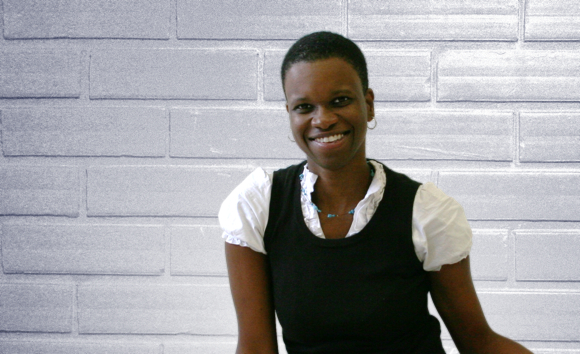 Parenting comes at a cost. Just how big of cost you ask? $235,000! That’s how much a recent government report found that a middle-income family spent over 17 years. According to the USDA, housing is the biggest expense. The estimate also includes money spent on transportation, child care, education, food, clothing, health care and miscellaneous expenses. The report says middle-income parents earn between $59,400 and $102,870. Because they make more, they spend more on their children. The cost did go down when the number of children went up, since savings came with recycling clothing and toys.

For many families, raising children also comes with major debt, even if you’re far from reaching the $200,000 total. I’ve maxed out multiple credit cards and bounced a few checks to keep my daughter under a roof in a nice neighborhood and in a daycare with a four-star rating. Along the way, I am learning where to cut costs and add a second income. I’m also realizing that it’s time to budget better. Before you have a money migraine–I can feel my forehead tightening thinking about this, meet Elisabeth Nyang. She’s raising her daughter on one income and stretching a dollar from Canada to Africa, her home country. Elisabeth shared her story of how she created a support system, got out of thousands of dollars in debt and took her daughter on a trip of a lifetime. 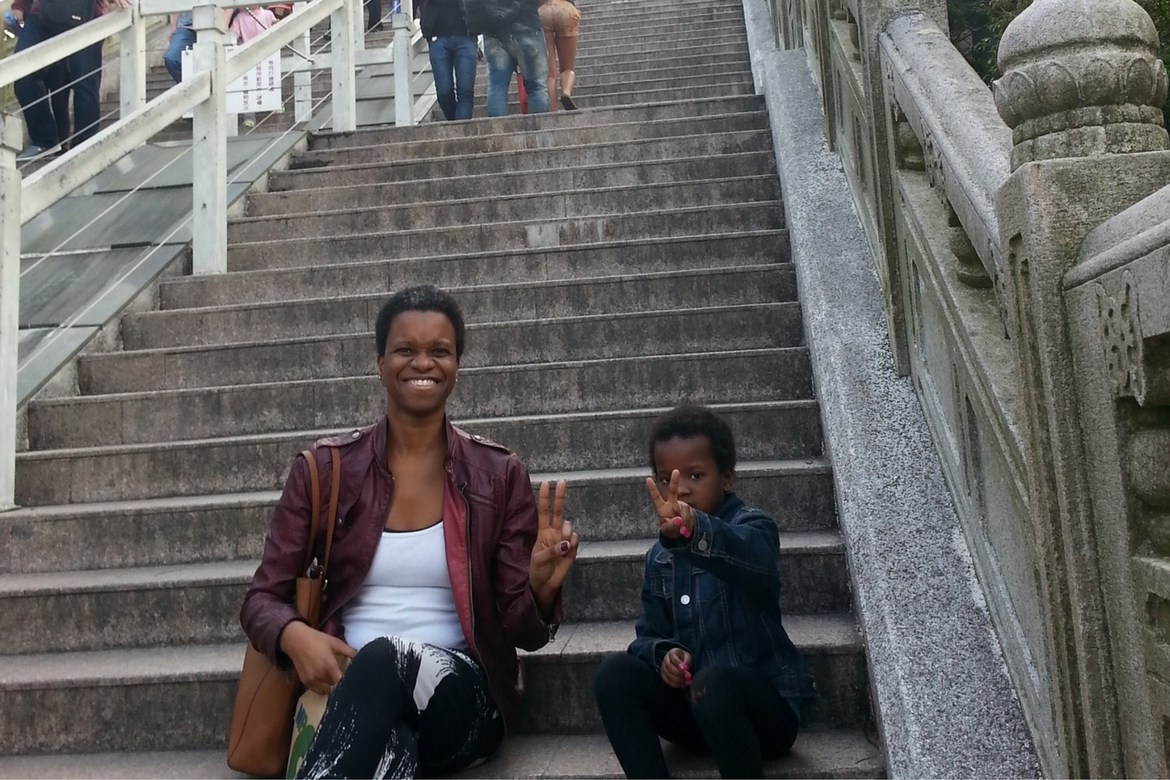 Why did you want to become a mother?

I have wanted to be a mother for as long as I can remember. Even though this pregnancy was not planned, having my daughter was the best decision I have ever made.

What has been your most memorable moment? Proudest moment?

My most memorable moment of my daughter was when she said “I love you” for the first time. My proudest moment was when she started walking on her own. She was an extremely late walker and didn’t take her first steps until she was 21 months.

How did you become a single mom?

I became a single mom pretty early on when I realized that my ideas and choices were different from Gabriela’s father. That doesn’t make us bad people, but I knew I would rather be a happy mom who’s single than an unhappy one in a relationship that would have inevitably fallen apart. I personally have no regrets, and my daughter is an extremely joyful and affectionate child, which reassures me that I am doing a good job.

How has the experience made you a stronger/better person?

Being a single mom is an ongoing struggle, and it has made me become a more resourceful, independent and flexible person as I have been placed in many situations where the outcomes were out of my control. In my opinion, it was with God’s grace, support from friends and family and my attitude towards life that has helped me grow.

Being a single parent can be challenging, but raising a child on your own in another country seems even more difficult. What is it like being away from your family?

I lived in Toronto when Gabriela was born, and had a great network and a lot of friends. Geographically, Toronto is only an hour flight to New York and Washington, DC, so I was able to see my family pretty often. But when I moved to Vancouver for my job, it was a lot harder to build a support system. Nonetheless, it wasn’t impossible. I joined a couple professional associations and meet up groups, like the YWCA single mom’s group. I’m thankful that I have family and friends who flew to visit me or called to check in.

When you became a mom, did you change your spending habits? How so?

Before I became a mom, I was pretty good with money, but I didn’t really have to budget anything. If I wanted to travel, then I would buy a ticket and get on a plane. If I wanted to buy a shirt or eat out for dinner, I didn’t think twice about making the purchase. I’m fortunate enough that I work in healthcare, so I have a good paying, stable job. Unfortunately, once my daughter arrived, the gravy train stopped, because I was now responsible for supporting two people on one salary. No one really grasps how difficult this can be, whether you are a single parent or not, until you have a child and your expenses go up $1500-2000+ each month once you factor in daycare, medical bills, food, etc. In Toronto, I was fortunate to live in a province that has a relatively liberal subsidy plan for households that earn approximately $110,000k or less. As a result, the province gave me a portion of my daughter’s daycare fees. In Vancouver, it’s a whole different ballgame since subsidy taps out around $30k, and the number of spots in daycares are slim. As a result, there are quite a few daycares that charge $90+/day! That’s a lot of money, especially on one budget with no subsidy. Also, the cost of living is on par with NYC, but with sub par salaries. It took me a few months, but I learned to be creative to stretch my dollars.

I made a lot of sacrifices to get out of debt, including the following:

1. I moved from a trendy neighborhood to one that has less amenities, but it saves me $750/month in rent.

3. I called the cell phone company and told them that I want to pay less a month, since I gave them $7,000 in business during the years I worked as a private practitioner. The end result is that my cell phone bill is $25/month (savings of $35/month) and my plan is the exact same.

4. I started shopping in mom and pop grocery stores, which cut my food down by 30% and saving $70/month.

5. I switched daycare providers to one that was located a little further east and am saving $600/month in fees.

7. I picked up extra clients and worked an extra two hours/day (10/hours week) for 11 months, which brought in extra income.

8. I started using Mint.com to help keep track of my spending and that was definitely an eye opener. Using the site definitely helped me plug my financial holes.

By doing all of these things, I was able to pay off the unwanted debt in a little over a year. I’m not going to lie, it was exhausting and hard to make these cuts. I decided to do it, because I would rather put in the hard work now and reap the benefits by spending time with my daughter later. I know there are a lot of people who feel that their child will only be young once and to spend as much time with them now. I can understand that, but for me, I rather put in the 50 hour weeks while she was young and now have the time to be with her at three-years-old, then to be struggling and working several hours when my child starts elementary school and not be around when she needs the guidance. One way is not better than the other.  You have to decide what works for you. The bottom line is that getting rid of debt is hard work, and there’s no way around it!

You also mentioned that you saved your money to visit your family in Africa. What did you do to be able to afford an international trip? Before I had my daughter, I travelled to Thailand and would love to take her abroad but it seems like such a far off goal. How did you make your trip a reality?

All of my friends know that I’m like an informal travel agent when it comes to traveling. I do a lot of research and find deals by keeping tabs on sites. We went to Gambia this June to see family, but went through Europe (more traveling and time to see other family members and friends) because it was cheaper than buying a direct flight. I managed to find flights for the both of us totaling $600 with taxes in for each of us to get to Europe. If you do a lot of research and plan, you will find a deal. I started planning a year before I went and picked up extra clients to pay for things. My go to sites were Orbitz and Kayak. I also paid for EVERYTHING in cash in advance, so when the trip happened, I didn’t have to stress about how will I pay for it later.

Why did you want to take your child to Africa? Why was it important for her to see where she came from?

Being that I am a Gambian American and have a lot of family still there, it was very important for me to have my daughter meet members of her family, see where my dad grew up, and also visit a place where she would be around other people who share her skin color. I would love to take her back, as life is short and a lot of family members are getting older, but that probably will not happen for a few years.

Africa is known as the motherland. What has your country, your culture taught you about being a mom?

Going back “home” made me realized that I need to set up our lives that we will eventually move to be closer to family in the US. Friends can come and go, but family will stay with you until the end. Despite this revelation, we will be further away from family to live in Asia for the next two years, but the position I’m taking will eventually allow us to relocate back on the US East Coast and place us in a better financial situation as well as allow us to make new travel memories.

At the time of this article, Elisabeth and her little girl were packing to relocate to Japan. Elisabeth says she will continue to contribute toward her retirement and my daughter’s college funds and rebuild her rainy day and travel funds while working abroad.  She’s teaching her daughter that money doesn’t grow on trees and requires work, but it’s OK to spend money on yourself as long as you have allotted money for your bills first.

Hey DFTM family–What financial advice will you give your children?  What tips do you have about getting out of debt?